In the shadow of the sword 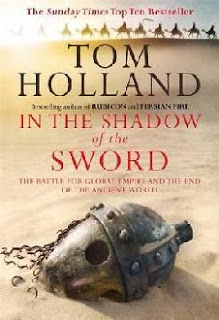 I recently heard a radio interview of Tom Holland speaking about his new book, In the shadow of the sword, which presents his own interpretation of the origins of Islam. From what Mr. Holland said, it appears that he was very excited to present to the world this new idea that Islam borrowed heavily from older religions. The assertion is that Makkah, a town in the middle of the desert could not produce a man who could write such elegant prose.

For a secular/atheist writer and researcher, arriving at such a conclusion does not require in-depth research. This is how the world works. Empires rise and fall, major centres of learning produce big poets and philosophers. Major civilizations attract the scholars and scientists to their cities. Anyone unconvinced by the Divine origins of any world religion should have doubts on the authenticity of any Holy Book.

But for me, Quran is the word of God, and it proves itself to be so. It does not need interpretation of historical events and what was happening around the world to prove its authenticity. Any book claiming to be the Word of God should have the evidence of its authencity within it.

So, in an unknown town in the middle of the desert, a man proclaims to be God’s prophet, just as Moses was a prophet to Israelites. Quran not only acknowledges this link, but also tells the Muslims that they must learn from the mistakes of the Jews and Christians. Quran also claims to be the continuity and culmination of the same message which was sent from the One God to all the nations and tribes before. So any similarity and resemblance between Islam and other world faith is not coincidental at all, but very deliberate. Islam is to the world faiths what human beings are to the rest of life on this planet. We share the same roots, but we evolved into better forms over the years.

Take the Islamic ritual of daily prayers. Muslims stand still, bow down, kneel, prostate, sit in submission with heads bowed, hands folded etc. etc. All done during the same prayer. You can find a hint of all faiths in this ritual.

Just like Hindus, Muslims believe in many attributes of God. Just like Buddhism, Islamic philosophy teaches to suppress the ego to find One True God. Just like the Zoroastrianism, Islam focuses on the fight between the good self and the evil self within us. Just like Judaism, Islam teaches to fast and pray on regular times during the day. Just like Christianity, Islam tells us to forgive and be meek and humble.

My point is, Muslims already know that Islam shares many values, rituals and ideas with the older religions. It is because all faiths came from the same God, who over many millennia sent His Guidance to mankind still getting to grips with its new found evolutionary superiority.

Anything to do with documented history will not resolve this question. Let us examine the content of Quran. If it stands the test, it is real, authentic Word of God. If it doesn’t, it is a fabrication, a work of elegant prose if you like.

There are many verses which I can quote. But I will only mention a few. I will not even attempt to interpret them. But please feel free to tell me which city in the world 1500 years ago had the knowledge such as I quote below?

We created them and strengthened their make; and when We will so decide, We will change their form to something completely different. (76:29)

Woe to every backbiter, slanderer,

Who amasses wealth and counts it over and over.

He imagines that his wealth will make him immortal.

Nay! he shall surely be cast into the "hotamah". (tiniest of the particles)

And what should make thee know what the "hotamah" is?

Which will leap suddenly on to the hearts.

It is locked up in outstretched pillars to be used against them.(104:2-10)

Do not the Unbelievers see that the heavens and the earth were joined together,

then We clove them asunder and We created every living thing out of the water.

And it is We Who have constructed the heaven with Might,


And after him We said to the Children of Israel, 'Dwell Ye in the promised land; and when the time of the promise of the Latter Days come, We shall bring you together out of various people. (17:105)