For the wise and more astute among us, if we spot a blatant lie in a publication, we can safely assume that the writer's opinion cannot be trusted on other matters as well. The website irshad.org has been in the business of slander and abuse for many years now. For those who don't know, this US based website is dedicated to anti-ahmadiyya propaganda. Almost all of the material on this website is a copy-paste job from other existing literature which is not a surprise. 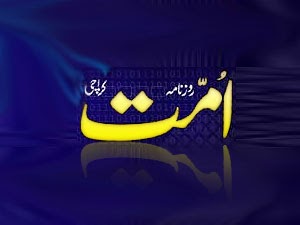 For example, in this translated article from Daily Ummat from 1997, the author Farooq Ali has made some very interesting claims. Now almost 15 years later, let us revisit these claims to see what time and internet have made apparent to us.

Ummat is the propaganda rag of Jamaat-e-Islami, the right-wing religio-fascist movement started by Abul Aala Maudoodi, who was a religious scholar of some merit but much disliked by the orthodox Sunni sects. Maudoodi's religious thought was shaped by rationalist apolgetics of Sir Syed Ahmad Khan. But Maudoodi's political thought bound him strongly to Syed Qutb's pan-Islamism which manifested itself in the creation of JI in 1941. JI has been on the forefront of pro-Jihad movements since 1970s which resulted in gross human rights atrocities in East Pakistan through their militant wing. During the soviet invasion, JI was heavily involved in Afghan war and Gen Zia's Islamization. Thanks to their contributions along with Deobandi seminaries and petro-dollars, Daily Ummat was never short of the headlines narrating the heroics of the Mujahideen during the 1980s. After the war, JI was recruited to contribute to the Jihad in Kashmir by Pakistani Military establishment. What was once a genuine indigenous and rightful freedom struggle now became a proxy war. While JI was busy destroying the Kashmir cause, its leadership forgot that their founder had forbidden the Jihad to defend innocent Kashmiris in 1948 and was duly arrested on the orders of then Prime Minister, Liaqat Ali Khan.

The author of the article in question alleges that Ahmadiyya Muslim Community has been busy in subversive activities against Islam and Pakistan. The evidence was apparently a report submitted to then Government of Pakistan about a terrorist cell established in Qadian, India. Such was the authenticity of this report that nothing came of it since. Not a single document, photograph, audio or video recording, confession of a captured miscreant was ever produced by this esteemed newspaper to prove it. Such is the nature of this poisonous propaganda, that due to religious bigotry, its readers believe in such lies. We now know fully well who is behind the brutal murders of Pakistanis, civilians and military persons alike. Daily Ummat may not admit to it, but a number of high value Al-Qaeda targets were apprehended or killed at the properties owned by JI officials.

The author is obviously addressing the Pakistani establishment or the time to remain paranoid about Ahmadis. And as with every right-wing conspiracy, its convenient to throw in a few RAW references and links to India and NGOs for good measure. I will ignore them as history and our understanding of it has moved on in the past two decades.

The article is ridiculously compilation of lies and twisted facts. To dismiss a conspiracy theory we must treat it like a poorly tailored article of clothing. Lies stick out of it like loose threads. You pick on one of them and it comes undone. For example:

Lie #1: In 1947 the Ahmadiyya Khalifa asked the boundary commission to consider Ahmadis as a separate faith to ensure Gurdaspur district stayed with India.

The fact is that the Ahmadiyya Jamaat made a separate representation (as a Muslim sect) at the commission to strengthen Pakistan's claim on Gurdaspur. Due to a very slim Muslim majority in the district, it was important that a strong arguments were presented in favour of Gurdaspur's inclusion in Pakistan. With this in mind the Ahmadiyya delegation asked Qadian to be designated a Muslim Holy Site of great importance to its members and thus to be included in Pakistan. This was done because Indian National Congress had made a similar argument to lay claim on Sikh holy sites which are now in Pakistan.

Daily Ummat also ignores the fact that while Maudoodi was adamant to oppose the idea of Pakistan, it was Ahmadiyya Jamaat which supported the Muslim League and Jinnah in all manners possible.

Recently released proceedings of the in-camera sessions of Pakistani Parliament in 1974 also reveal that this question was raised by Yahya Bakhtyar and answered by the Ahmadiyya delegation.

This matter was settled by the Munir Commission report of 1954 . Justice Muneer was a member of the Muslim League delegation at the boundary commission and he testified to the excellent work done by Sir. Zafrulla in his report.

Lie #3: Kashmir Committee was a conspiracy to claim Jammu and Kashmir for the Ahmadiyya Community.

The author's reasons for this are absurd. He could only think of one fact that Jesus is buried in Srinagar according to the Ahmadiyya belief and somehow Ahmadis deemed it important enough to conspire a Muslim political revival in the region. How ridiculous is this?

The fact is that decades of relentless oppression of Kashmiris was ignored by the Indian Muslim politicians until it was raised by the Khalifatul Masih II. He not only influenced the Indian Muslim leaders to rally around him to inform the country of the human rights situation in the state, but also provided legal help, education and political organization to Kashmiris to defend their rights. Kashmir committee was the reason Kashmiri's have a political voice today.

Sir Zafrulla Khan presented the case for Kashmir at the UN with such force that Indian delegate was considered to be defeated by those present at the security council. Some US diplomatic correspondence on this matter also sheds light on the impact made by Sir Zafrulla in those years.

It is also odd that the author focuses on the tomb of Jesus as a main reason for Ahmadi interest in Kashmir, yet later insists on Christian-Ahmadi conspiracy against Pakistan. If it is about shared beliefs, Christians will find more common grounds with Daily Ummat as both of them believe Jesus to be alive in heavens.